With 8 million copies sold, Scientific Advertising by Claude Hopkins is probably the best-selling book ever written about advertising. Since it was published in 1923 it has won a legion of admirers, with David Ogilvy going as far as to say, “Nobody should be allowed to have anything to do with advertising until [they have] read this book seven times.”

Its fans even extend to the world of fiction: in an early episode of Mad Men Peggy Olson reads it in preparation for work.

Probably the most quoted section from the book is the advice that brands should avoid humour. Hopkins famously said: “Don’t treat your subject lightly. Don’t lessen respect for yourself or your article by any attempt at frivolity. People do not patronise a clown. There are two things about which [people] should not joke. One is business, one is home. An eccentric picture may do you serious damage. One may gain attention by wearing a fools cap. But he would ruin his selling prospects.”

More than ever it now seems brands are following his advice.

Kantar recently analysed 200,000 global ads and reported a stark decline in the use of humour in ads. Their data shows that in 2004 more than half (53%) of ads were funny or light-hearted – or at least tried to be. But this proportion has steadily declined, so that in 2020 barely a third (34%) made any attempt at humour.

But is the current trend for more serious messaging a step in the right direction? Is it true that people don’t buy from clowns?

From assertion to analysis

If we move away from Hopkins’ forceful assertions and instead focus on the realm of facts, the story changes.

There are a number of experiments that suggest funny ads tend to be more effective.

But the evidence stretches beyond one-off studies. While individual experiments are useful, the most robust evidence comes from a meta-analysis. Here, a researcher combs through all the existing high-quality research and, using a variety of statistical techniques, combines the results to find common patterns.

The latest meta-analysis of humour in advertising was conducted in 2009 by Martin Eisund, a professor of marketing at the European University Viadrina in Frankfurt. He managed to find 54 papers on the topic published between 1960 and 2004. He then painstakingly whittled them down to 38 papers where there were no data quality issues.

Next, he identified the average impact of humorous ads on 16 variables. The results can be seen in the table below. The third column is the most important one to focus on. It shows both the scale of the correlation between humour and the desired outcome, and the statistical significance of those findings. 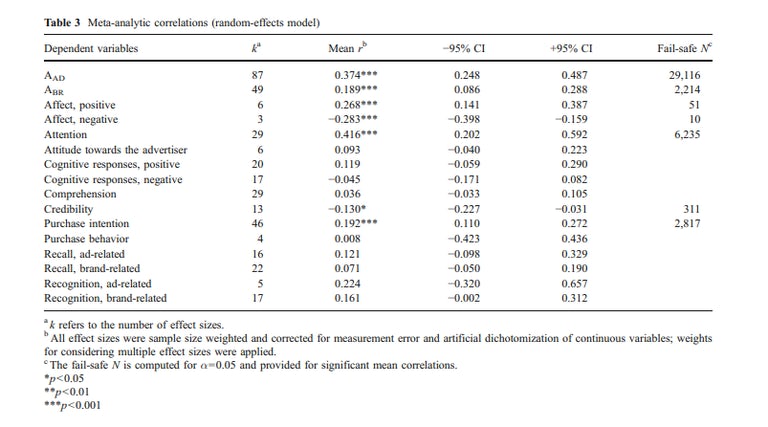 The data marked with three stars are the most statistically significant findings – there is only a one in 1,000 probability that they were caused by chance.

At this level of significance there are six effects. Humorous ads had a significant beneficial correlation with:

When Eisund looked at other, less robust, statistical significance levels he found one negative correlation: between use of humour and credibility. This finding, marked by one star, is significant at 95%, meaning there is a less than a 1 in 20 chance that the finding is random.

The size of the number in the third column is also important – the bigger the number, the bigger the correlation. The most sizeable effects were the link between humourous ads and improved attention, and attitudes towards the ad.

It’s not just academics that have spotted the benefits of humour. The analysis of the IPA Databank by Les Binet and Peter Field has found a similar story. They analysed 243 campaigns from 2012 to 2020; 118 campaigns that used humour and 125 that didn’t. Once again, the humorous ones tended to be the most effective – on average they had 1.7 very large business effects, such as higher profits or market share, compared to 1.4 for the non-humorous ones (as reported in the excellent Look Out by Orlando Wood).

The findings from the metanalysis and the IPA Databank warn us about the dangers of straying away from humour on such a large scale.

Of course, not all brands are the same. Some brands might feel the need to avoid this approach. Perhaps those where credibility is the key objective. Equally, there are brands who might enjoy higher than average results from humour.

Maybe  one of the biggest opportunities is in persuading people in areas they don’t want to be persuaded. As Sarah Carter, one of the industry’s most respected planners, remarks, “As anyone who has successfully coaxed a toddler to eat their food by pretending a spoon was an aeroplane will know, if you can disarm you can persuade. Some keep it playful. People like it this way. And it works.”

You could apply this idea in three ways:

First, prioritise humour when trying to encourage people to consider unpalatable topics, such as death.

Second, consider humour if you want to convey a point that might be considered offensive if communicated directly. For example, The Economist’s basic marketing premise was pretty much that if you don’t read it, you’re a failure. Unpleasant when it’s put bluntly, but as the legendary copywriter of its ads, David Abbot,t said, “things you can’t say literally can often be said laterally”. 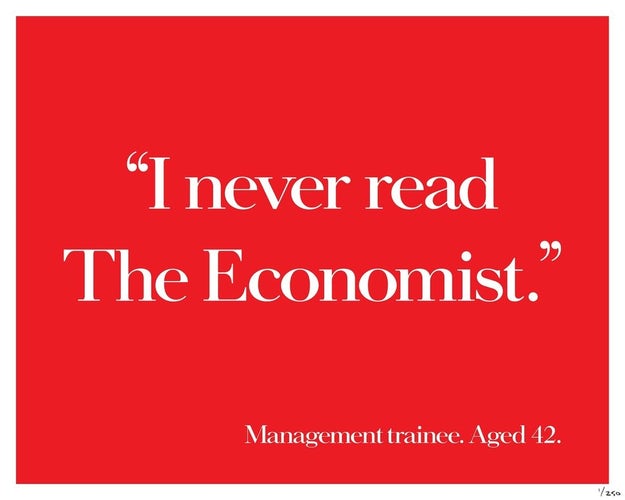 Third, humour is a brilliant way of getting people to engage with a brand that people feel isn’t for them.

So, next time someone trots out that tired old line about no one buying from clowns, remind them of Winston Fletcher’s words: “The only reason people don’t buy from clowns is that clowns don’t generally sell things.”

This article was written by our head of behave and strategy Will Hanmer-Lloyd and Richard Shotton, and was originally publised in Marketing Week.