Our beliefs and behaviours are influenced by how we perceive the world. This is why when creating campaigns it is vital to understand consumer perception, and how this can influence people’s opinions of brands and products. But what factors can actually affect perception and perception change?

People have evolved to build an image of the world in a heuristic way such as using mental shortcuts, rules of thumb and cognitive biases. An example of such heuristic is the exposure effect. The more frequently we are exposed to a stimulus, the more favourably we perceive it. In a classic experiment by Robert Zajonc, university students were presented with meaningless “Turkish” words and asked whether they think the word means something positive or negative. The more frequently students were exposed to a given word the more positively they perceived it. This insight lies at the heart of all advertising – the more customers see a product the more favourable their perception will be.

Another factor influencing perception is our affective state. If we are in a positive mood, we will more likely perceive the world positively because we project our mood onto outside factors. According to the affect-as-information theory, people find it difficult to disentangle information coming from the environment and the information about internal affective states. As these two are mixed, the positive emotion influences how we see the environment. This explains why customers are more likely to engage with a product when they are in positive mood. The presence of humour in adverts is also one of the strongest predictors of ad effectiveness. An exception of this rule relates to the charity sector where negative moods have been found to encourage people to donate. 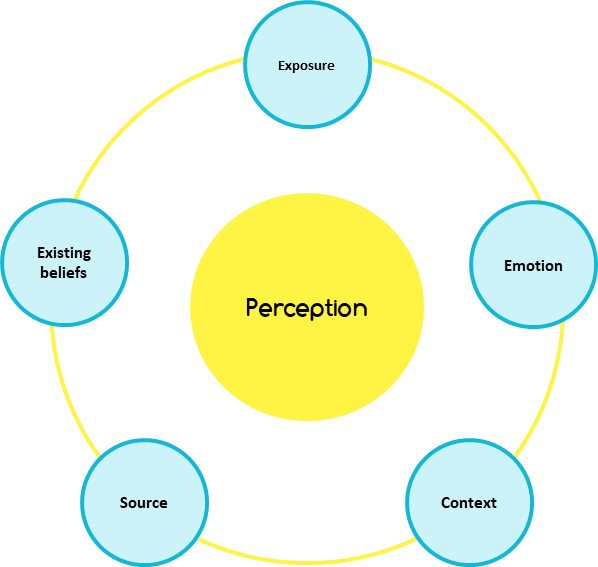 Context can also heavily influence perception. In a study by Dan Ariely participants were asked to say the last two digits of their social security number. Then, they were asked to assess the price of a given bottle of wine. Participants who were primed with large numbers (80-99) on average perceived the bottle of wine to be worth $56. However, participants who cited small numbers (up to 20) on average said that the bottle was worth $16, showing our perception of fair pricing can depend on the seemingly irrelevant contextual information that we are primed with.

Another important factor is the source of information. The more trustworthy a source, the more likely we are to accept the information. Emotional attachment or history of previous positive interactions also predict higher levels of trust. This represents the power of social media advertising where brand information can be disseminated among friends or among followers of an influencer. Facebook uses this insight when adding a nudge to a page such as “[your friend] X likes this page”. This short sentence works better than any other type of direct persuasion. We also trust information more if it comes from a neutral source rather than a source which has an active interest in the provision of this information. This is why people are more likely to trust reviews and opinions of customers rather than the information provided by the brands. Marketers can use this insight to frame their message as coming from a third-party source rather than from the brand itself.

Finally, our existing beliefs also influence how we perceive the world. Our perceptions are created by information from our sensory organs. However, the information retrieved from the memory (in a form of schemas and expectations) is also taken into the equation, known as the top-down process. A good illustration of this phenomenon is a study in which participants were given two identical ice creams, but were told that one was made from natural ingredients in a traditional way, while the other was made with artificial ingredients and sweeteners. The task was to say which of them tasted better. Despite both ice creams being the same, most participants perceived the “natural” ice cream to be better, demonstrating how our mind can bend reality to make our perceptions consistent with prior beliefs and expectations. As such it represents a significant challenge for marketers, whose job is to effectively produce a perception change by knowing what matters to customers and framing the campaign accordingly.

Darius Lucas is a psychologist specialising in behavioural science and neuroeconomics. His main role in Behave is generating behavioural insights for strategy and media campaigns. He joined Behave after completing his MSc in Psychological Research at Oxford.